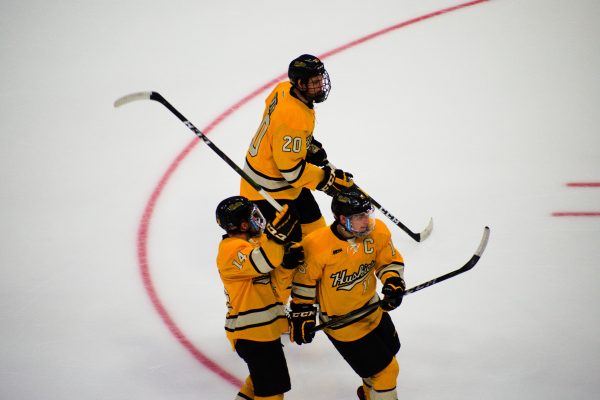 A hockey jersey is a type of jersey worn by hockey players. Back in the days, it was traditionally called a sweater, like a wool-knit clothing, since the game was mainly played during winter time. This clothing is still being worn up to this day by hockey players all over the world. Many teams opt for custom hockey uniforms for their team.

These days, jockey jerseys, or the sweaters, are typically made out of tough synthetic materials like polyester. This is to tick away moisture and keep the players dry and comfortable. Just like any other jersey, hockey jerseys usually follow the team’s colors and match them with their bottoms, socks, and other clothing. They are also usually printed with the team’s logo, player’s name and designated number, and other needed details by the team.

The design is often adapted for specific cases, such as NHL Vancouver Canucks teammates Henrik and Daniel Sedin. Their last names are accompanied by their first initials, since being twin brothers they share the same last name on the same roster. The National Hockey League no longer permits 0 nor 00 for jersey numbers, as they cannot be entered into the NHL’s database, and the available numbers only go up to 98 since the League retired the number 99 in honor of Wayne Gretzky.

A team captain wears an uppercase “C” above and to the right of the team logo on their sweaters (although a few NHL teams have the uppercase letter above and to the left of the team logo). Two other players, designated alternate captains, wear an uppercase “A” on theirs. Sweaters worn in European leagues and tournaments are adorned with ads, a concept borrowed from football jerseys. Most professional ice hockey teams sell replica sweaters of their famous players at their arena, as well as through sports memorabilia stores.

In order to have your own set of custom hockey uniforms for your team, it is important to scout for good manufacturers that produce high quality custom hockey uniforms that give both style and comfort. If you need hockey jerseys produced, we are here to help you. Srlsports can easily create them with your own chosen colors, design, and the needed details such as team number, name and logo. Simply contact here to send in your brief.