Oztag goods has been constantly expanding along with the sport’s rising popularity. Custom Oztag Jerseys from SRL Sports has earned a solid reputation. They are capable of producing anything you desire with the assistance of their extremely talented design staff. Additionally, you have the choice of choosing either a full custom oztag jersey from top and bottom team uniform or just custom Oztag singlets. You will undoubtedly show a unified front at the upcoming Oztag game with each uniform you wear.

The first people that come to mind when considering potential consumers for custom Oztag jersey or any other customized jerseys are those involved in the sports industry. Fans who are devoted to their favorite team will need custom Oztag jerseys to express their support, while those who follow pop culture may just want it to look nice. Players, support staff, and coaching staff all need to wear something that symbolizes them collectively. In general, all of the aforementioned justifications have to do with aesthetics, but customized jerseys serve more purposes than they might first appear. We’ll talk about the advantages of custom jerseys and the justifications for having custom Oztag jerseys today.

In order for people to relate to you if you play sports, you need to be recognized. It’s a need and a top priority for the team. It makes it much easier for spectators, umpires, and officials to recognize the participants. In order for fans to recognize team members on the field when they wear custom Oztag jerseys, their team logo and jersey color must be prominent. Both the athletes and the coaching staff gain from it. People will be able to identify the team and players more easily if they wear custom Oztag jerseys with the same color and emblem.

Players feel closer to their team when they wear their uniforms or custom Oztag jerseys. They feel more unified because they are aware that what they are wearing is representative of the entire team, not just individual members. It supports their development of great teamwork and team spirit and makes them into advocates for the sponsors or brands they support. It also aids in player recognition on the field; you should be able to identify who is where and which player has to be spoken to in order to carry out a specific activity.

A plain sports jersey or outfit won’t be as relatable as one made specifically for your team because it shows out the consistency. When you dress in similar colors or patterns, you appear more united. Custom Oztag jerseys with the team’s name and insignia will appear more official. This consistency gives off a good air of professionalism. A cool custom made sports apparel may inspire the players to participate and represent the team, and uniformity can also improve player morale.

Individuals dressed similarly, it suggests that they are cooperating to achieve a common goal. Their shared sense of belonging to one another and to their supporters acts as a strong motivator. This sense of camaraderie causes the team to feel like one large extended family. They collaborate because they have same goals and aspirations, regardless of whether they win or not.

Players come from a diverse range of racial and ethnic backgrounds. Having custom Oztag jerseys helps close any gaps that may exist owing to other inequalities. In a team sport, the concept that the team comes first over each player is reinforced by the uniform. It assists in lowering potential prejudices, which has a favorable impact on the team’s performance and because a group of players playing for themselves is considerably worse than a team playing for the team. Being part of a team inspires and motivates players. They experience exclusivity and luxury as a result when they see they have the same custom Oztag jerseys with their teammates who have different background and ethnicity from them. They are pleased of themselves and are inspired to work more for the benefit of the entire team. It increases self-assurance and the will to use all effort and do their best to prevail. No team game is won on its own.

Some uniforms appear to be fun to wear. Custom Oztag jerseys include edgy, current, and fashionable designs. In order to catch everyone’s attention, you need to simultaneously feel at ease. You might achieve that by wearing striking custom made sports apparel. Your custom jersey’s design captures the energy in the room, making you and your team appear more formidable and competitive. Many teams decide to wear personalized jerseys so they may appear more fashionable and contemporary on the field. It aids in the development of a confident air among the players, and even the team’s opponents can sense it.

There are simple and complicated designs. Teams can have nearly anything on their custom Oztag jerseys when they choose to contact the individuals in charge of their overall appearance. Professionals will evaluate the players’ identities and the team’s ethos before designing the shirt. Since there is a great deal of creative freedom in designing custom jerseys, teams must ensure that their designs will appear as distinctively different as they like. Making the best of your custom made sports apparel can help you make a good first impression. A very skillfully made personalized jersey is necessary if you want to stand out from the crowd. 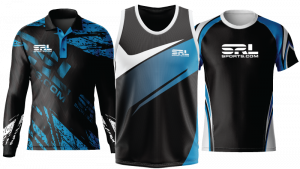 Along with the sport’s increasing popularity, Oztag goods has been consistently growing. The reputation of SRL Sports’ Custom Oztag Jerseys is strong. With the help of their incredibly brilliant design crew, they can create anything you want. Additionally, you can select just custom Oztag singlets or a whole custom oztag jersey from top to bottom team outfit. With each uniform you wear at the upcoming Oztag game, you will undoubtedly present a unified front. We produce custom Oztag shirts not only for participants in the sport but also for die-hard spectators and team supporters. But wearing the jersey of your favorite team is just one aspect of being a sports fan. The passion and identity of the squad should be reflected in the colors you wear. As a fan, you are not only there to encourage your side but also to uplift the spirits of everyone else.

Grab your own oztag team jerseys from SRL Sports and have them delivered to your house to show off your passion for the game. Buy today!